On 14th December 2012, Adam Lanza walked into Newtown’s Sandy Hook elementary school and proceeded to kill 26 people, including himself, with a Bushmaster assault rifle and a Glock 10mm hand gun, both of which were legally obtained by his mother.

Following the Newtown school shooting, there was public outrage, grief and shock – there were promises that this latest in a long line of shootings wouldn’t go by without an immediate and strong policy response.

Part of the policy response was a joint amendment. This was a limited compromise amendment and stayed clear of the main issues (as usual) which was gun control. This has just been blocked by 54 votes to 46, just 6 short of the magic number. Six other proposals were also blocked, including the banning of semi-automatic weapons and the reduction of magazine sizes to 10 clips.

The sun rises earlier this month above the US Capitol as volunteers place crosses, symbolising grave markers, on the National Mall in Washington, to ‘remind Congress action is needed on gun violence prevention’. Photograph: Kevin Lamarque/Reuters

Who in their right mind wouldn’t want tighter background checks on some of the most deadly weapons available? Why would anyone not want to make it harder to buy semi-automatic assault rifles? I wonder how many politicians feel that the economic and political power of the NRA and lobby groups in general is too great? How, with supposedly 90% public support for tighter background check controls, did this proposed amendment not pass the 60 vote mark?

Obama, in his angry and regretful speech, called it a shameful day for Washington. One of the members of the public gallery (a survivor of the Newtown school killings) shouted shame on you! In a way i’m so angry and almost embarrassed on behalf of all the Americans who are indirectly being represented by these frankly crazy Senators and NRA members.

I think this image says a lot about where certain United States values are. 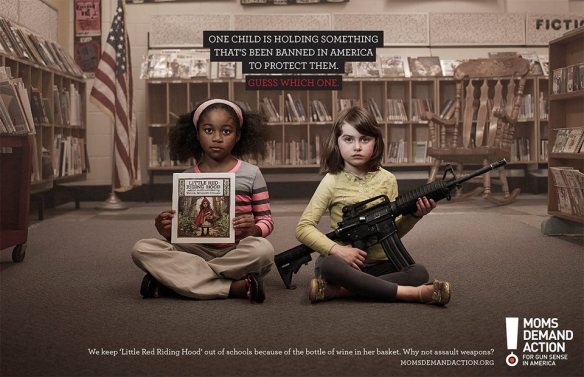 The voting senators are being allowed to take a morally dubious stance by the voting American public. They obviously feel that a vote against the amendment wouldn’t have a significant impact on their political positions, or their chances of re-election. The problem isn’t JUST the NRA (although they are a big part of it), but also the cultural values of Americans, including the elected politicians and the voting general public. All these groups must take the blame for this, and for the on-going state of violence and gun-related killings in the country.

Here’s another way of looking at the issue. If there was a disease epidemic which was annually killing more than 20,000 Americans, the action to stop the cause of the deaths would be extremely swift. There would be a powerful and concerted effort across the political and cultural spectrum to stop these deaths and to find a cure for the disease.

Gun-related deaths in the US runs to more than 20,000 per year. Yet policies and amendments on gun control are still being blocked. There is a point where sanity is overridden by a cultural force and sometimes when this starts to happen, a radical shift needs to occur, unless people want the situation to become even worse. I really feel if the president does indeed have special powers to alter the course of this issue, he needs to use them very soon and start representing what the vast majority of the American public want, and which they deserve.